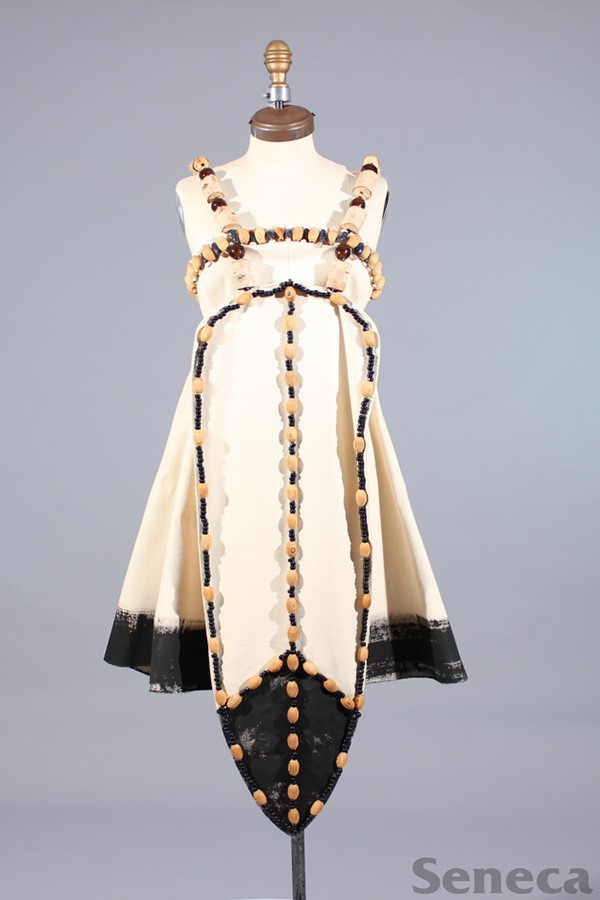 The SFRC has a dress by Canadian fashion designer D’Arcy Moses in the collection. The garment is a fascinating juxtaposition of traditional First Nations iconography as well as contemporary non-Indigenous cultural influences and can be read like a text though object-based research. Intricately beaded and adorned, it contains iconographic elements of the South Slavey Dene ancestry of Moses; a First Nations population who are native to the Northwest Territories of Canada. The dress, (like much of Moses’ oeuvre) uses First Nations iconography and references traditional handicraft like beading and the use of skins.

As a designer, Moses consciously researched and incorporated First Nations elements into his design work as a way of reclaiming his heritage (Busch 2015). Moses was adopted as an infant into a non-Aboriginal family in Camrose Alberta and found about his Dene ancestry on his eighteenth birthday. As a means of learning about his heritage, Gitxsan Hereditary Chief Alice Jeffrey welcomed him to her Pacific Northwest Coast community where Moses started to feel in more connected with his lineage. The button blankets and bold designs of the region feature prominently in Moses’ early work. Moses recalls well-intentioned opposition to his use of his cultural heritage: “All my friends told me, ‘Don’t incorporate First Nations with fashion, you’ll never make it. Nobody cares,’” (Moses qtd. in Bush 2015). However, people did indeed care, soon after launching his line Moses garments could be found hanging in Holt Renfrew in Toronto, and Saks Fifth Ave. and Nieman Marcus in New York City (Bush 2015). Here, the use of First Nations motifs by Moses was a conscious, creative, reclamation of a personal identity.

This is not always the case when First Nations iconography is used in fashion, however. Fashion brand Kokon To Zai (KTZ) created a sweater that was a very close copy of a garment originally made and worn by an Inuit Shaman named Ava over a hundred years ago. The identification of the obvious visual connection re-ignited the ongoing debate around what constitutes inspiration versus appropriation. Also, at what point does cultural sensitivity become a form of censorship, and where does one draw the line between what is genuine tribute, and what is stolen religious or cultural material?

The granddaughter of the original maker Salome Awa, had to this say to the Canadian Broadcasting Corporation (CBC) radio program As it Happens, about the misappropriation: “…these are sacred images that they are using…they are breaking the Inuit sacred laws of duplicating someone else’s shaman clothing . . . and for profit of all things”, and elaborated further: “This is a stolen piece…there is no way that this fashion designer could have thought of this exact duplicate by himself” (CBC 2015). The family was horrified that their cultural heritage had been stolen, and also that the sacred nature of the original garment was completely disrespected in the KTZ garment.

The entire issue of cultural appropriation is a volatile one due to the painful history of conquest, economic domination, and mistreatment of colonized populations (Comaroff & Comaroff 2008; Shand 2002). There is more to the issue of appropriation than just stealing designs, which some would argue is one of the foundations of the fashion industry. It goes far deeper and involves colonial possession and misuse of cultural assets that are larger than the representative visual motifs or designs. It is an entire way of life that these symbols are woven into that is also under attack. Protesting and challenging appropriations becomes a potent form of Indigenous power in reclaiming and protecting cultural heritage assets, both sacred and quotidian (Shand 2002):

“…The central fact of indigenous cultural heritage: that in its many forms it articulates and contributes to indigenous identity, heritage, and the relationship of different tribal and linguistic groups with the world. Instead of being commodities owned by individuals produced for potential economic benefits (as is the presumption of the Anglo-American model), indigenous heritage registers relationship, survival, struggle, and, most importantly, identity.” (Shand 2002, 62)

The debate will be ongoing as the questioning of appropriation will not just be focused on design but will by necessity encompass intellectual and spiritual practices as well, which up until now have been incorporated uncontested into New Age practices (Kulchynski 1997). Logistically it is highly problematic to enforce legal copyright in a transnational setting. This case would be almost impossible to prosecute as the company is American, based in London, and shows in Paris.

However, although there would be a very tenuous legal claim for the Ava family to pursue, that does not mean there are no other avenues to pursue justice. The crime here is also a fashion crime: visually copying verbatim a cultural object. As such it could be (and was) tried in the court of public opinion, which called it out, and held onto the misappropriation until the momentum gained traction. This was compounded by the fact that it is not the first time the label had gotten negative press for un-credited use of an Indigenous motif. In fact, just one season prior there was a similar outcry over another stolen design. This time an “hourglass” motif with cultural origins originally designed by a Northern Cheyenne/Crow First Nations designer from the United States: Bethany Yellowtail. The spider motif was featured in her collection for Spring 2015 (Keene 2015). The reaction to the handling of the Ava garment is different than it was for Yellowtail, partially because the precedent for misappropriation had already been established by the brand’s actions. The first time could be explained away as ignorance, the second time it was seen as deliberate.

If a designer knows they are likely to be pilloried for stealing or misappropriating materials, they are going to think twice about it. The vocal outcry spoke to a heightened awareness and sensitivity respecting the use of First Nations iconography in general and also the pattern of misappropriation by the brand. Here the misappropriation and subsequent viral backlash ended up costing the brand money as it was forced to take the sweater off the market and recall the garment from their retailers (Gush 2015). In fashion, sales are king, recalled product is deadly, as it has to be destroyed. Leaving the designer to swallow the lost revenue, offer credit to their retailers, assure them that this won’t happen again in the future…and hope they will buy again next season. Perhaps this needs to be the strategy for handling this type of misappropriation in the future. Create such a vocal backlash that the company will have to consider the potential financial and public relations fallout in the future as an integral part of the design process.

The creative exploration by Moses, however, is entirely different than the Ava appropriation of motifs with no regard to their cultural value and importance. It is in fact, an engagement that honours the cultural context where the iconography originates. The contemporary engagement with cultural traditions is not de facto a bad thing (Socha 2020), there are many cultural handicrafts and histories that are in danger of disappearing, creative engagement with cultural materials as long as it respects the source and is knowledgeable about the significance of the cultural heritage can be a valuable form of heritage protection. This garment by D’Arcy Moses can therefore be read as both a powerful assertion of a cultural continuity as well an affirmation of personal identity.

This research comes was presented at the 2016 “Fashion Now & Then Conference” at the LIM College Libray and Archives, New York City

D’Arcy Moses from the SFRC Collection

A Celebration of Indigenous Culture at Seneca